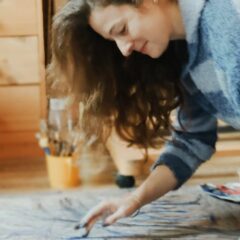 Severine Bebek was born in Gotha in 1983. After graduating from the Salzmannschule in Schnepfenthal (near Gotha) and completing an FSJ, she began her bachelor’s degree in art and German at the University of Erfurt in 2003, which she successfully completed in the summer of 2006.

In 2006 and 2007 she spent two semesters studying fine arts and art history in Amiens/France, at the Université de Picardie Jules Verne.

After her return, Severine Bebek continued her studies at the University of Erfurt, where she earned her master’s degree in 2009 for teaching at regular schools in the subjects art and German. The legal clerkship was followed by the successful completion of the second state examination. Severine Bebek now works full-time as an art and German teacher.

Severine Bebek is married and the mother of two children.